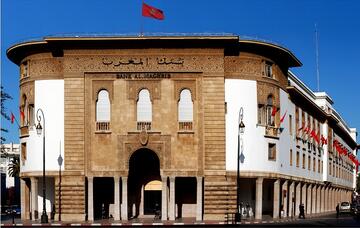 The building of the headquarters, a masterpiece of architects Cadet and Brion, was constructed in three phases during the twentieth century. The first plans were drawn up in 1922 by Auguste Cadet, and the construction works began in March 1923 on a surface area of 1,842 m² (the section where the Bank’s Museum is located). To extend the building, the Bank purchased in 1924 a plot of 3,852 m² in the background of the first one. Construction works of the first tranche lasted until 1930 and involved the finest master craftsmen (maalem), giving a majestic look to the building: a façade made of Salé carved stone, a main entrance portico porch standing on marble pillars, a natural cedar wood dome encrusted with glass at the lobby ceiling, artistic patterns on the windows ironwork…

The second tranche bordering the northern part of the land was built in the 50s by architect Edmond Brion. The latter, who took part in the realization of the first tranche, managed a perfect continuity between the two parts of the building. In the early 70s, architect Mourad Ben Mbarek finished construction of the perimeter of the land on the southeast and southwest sides, while drawing on sketches of his predecessors.

Services to the public

Educational Space
By continuing your visit to this site , you accept the use of cookies . For more information, Click here

For an optimal viewing of this website's pages, we recommend using the newest versions of the browsers: